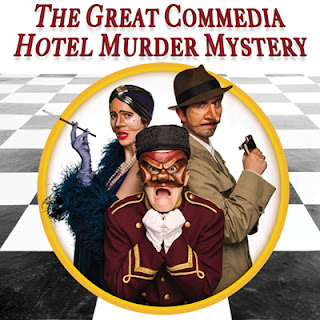 CIAODC SPECIAL OFFER: Buy 1 Regular Ticket Get One 50% off with code STUDIOBOGO50

Listen to CiaODC's Chat, Getting Behind the Mask of Faction of Fools' 10 year Anniversary Celebrating The Great Commedia Hotel Murder Mystery.


SPECIAL EVENT: "Coffee and Conversation" on Saturday, May 11th at 1pm at Gallaudet University's Elstad Annex. Free entrance with ticket to the following 2pm matinee of The Great Commedia Hotel Murder Mystery! Italian biscotti and coffee generously donated by the Signing Starbucks on H Street will be provided.  Enhance your viewing experience!  Get caffeinated, learn all about the style and characters of Commedia dell'Arte, AND get a sneak peak into the creation of The Great Commedia Hotel Murder Mystery from Producing Artistic Director and Murder Mystery Playwright Paul Reisman.

About The Great Commedia Hotel Mystery: Faction of Fools Theatre Company, DC’s Commedia dell’Arte theatre company, brings the stunning conclusion their 10th Anniversary Season with this world-premiere production! Mustachioed detectives, zanni bellhops, femme fatales, and more make this one for the books. In the grand tradition of Agatha Christie, Clue, and Sherlock Holmes, this love letter to classic mysteries is not to be missed.  Join the Fools for laughter, murder, and mayhem as only the Fools can provide. You'll be guessing “whodunnit” until the very end!

As DC's Commedia dell'Arte theatre company, Faction of Fools Theatre Company’s mission is to entertain, educate and elucidate through the practice and performance of Commedia dell’Arte by bringing productions to the stage infused with Commedia's best attributes: physical discipline, spontaneous imagination, collaborative energy, and joyous wonder. The Fools are the Helen Hayes Awards recipients of the 2012 John Aniello Award for Outstanding Emerging Theatre Company. Faction of Fools' Producing Artistic Director Paul Reisman serves as playwright and director for The Great Commedia Hotel Murder Mystery. A founding member, Reisman has directed and produced many recent favorites including Henry V, The Cherry Orchard, The Merchant of Venice, and Foolish Fairytales, which he also wrote. He directed and adapted Pinocchio! (nominated for a Helen Hayes Award for Outstanding Production, Theatre for Young Audiences), co-adapted Faction’s acclaimed A Commedia Romeo & Juliet, and has directed and appeared onstage in many other Faction of Fools productions since 2011.