Before the rise of the Roman Republic and the mighty Roman Empire, there was another prominent civilization that dominated the cultural and economic life of the Italian peninsula. The Etruscans may be somewhat less celebrated in popular culture than the Romans. To be sure, their influence lives on in more than just the name Tuscany, which is derived from the Roman word for the Etruscans, tusci or Etrusci. As noted by the Exhibits Development Group, which worked to bring this traveling exhibit to DC, the Etruscans are revered as a civilization of "skillfull seafarers, wealthy merchants, and skillful metallurgists."

Lucky for us in the Nation's Capital, the National Geographic museum will open the highly anticipated exhibit, The Etruscans: An Ancient Italian Civilization on June 10th. Another highlight of the Dolce DC/Italy@150 promotion that we have blogged about through the Spring, the exhibit will feature more than 450 artifacts from the areas of Florence and Chiusi. The wealth of artifacts range from burial gifts, domestic implements, and tools and weaponry, to jewelry, and skillful sculptures. Together they help to bring to life the development of the civilization from its origins to its ascendancy on the peninsula.

This distinctive collection includes rare artifacts on loan from the Museo Archeologico Nazionale, Florence, and the rarely-seen Collezione Cambi, Chiusi. They include a 7th-century BCE carriage found in the Tomb of Carriages at the Necropolis of San Carbone, Populonia; a late 6th-century BCE clay amphora from Argilla; a 4th-century BCE three-foot high alabaster urn from Perugia; a 4th-century BCE gold diadem; and a late 2nd-century BCE terracotta sarcophagus.

I can't wait until the exhibit opens, and we'll be sure to update CiaoDC followers once we attend! Guided tours will be available Wednesdays at 11 AM. There is also a family activity daily at 2 PM. 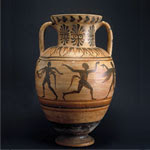 Also, we'd love to hear from anyone who does attend. You can leave us a comment, send us a tweet, or a facebook message. The exhibit will remain open until September 25, 2011.
Posted by Italiana82 at 4:53 PM