We have seen many opportunities recently to watch Italian films in the DC area.  This Thursday, December 2nd, Georgetown University's Italian Department is holding a screening of "La Strada di Levi" at 2:45pm in the ICC Auditorium, 211A.  More information and directions are here.  Visiting Fulbright Chair Professor Barbara Curli will introduce the 2005 documentary which follows Primo Levi’s adventurous eight-month journey from Auschwitz to Turin in 1945, as first narrated in his 1963 book “La tregua” (“The truce”).

Georgetown's website describes the movie as follows: "Accompanied by Levi’s powerful words and imitating the 'picaresque' style of the book – 'un’Odissea del ritorno movimentata e variopinta' (Italo Calvino) - the movie is a thought-provoking journey through post-communist and post-9/11 Eastern Europe. It presents a vivid picture of the present redefinition of European “borders” and identity in a period of uncertainty and transition – a 'truce,' as Primo Levi would say, in a 'suspended time' and 'suspended space' of Europe’s history."

Check back here for more opportunities to see Italian films!  Buon divertimento.
Posted by Ciao DC at 10:16 AM No comments:

CiaoDC asked subscribers what they were most thankful for that had something to do with being Italian and here's what they said (read below).  Plus, read on to find out the winners of our November giveaway!
"Grandma's Italian cooking. Her sauce was so good. I have never had anything else comparable."
-- Debbie Creel
"There are many things I am grateful for in my life. My Italian heritage is something I am extremely proud of and continue to pass along to my children and my 2 grandchildren. My grandmother and mother were probably the best cooks ever. I learned so much from them and I am very proud that my family and friends enjoy my cooking as well. I love to cook and have my grandmother and mother to thank for instilling this love of the kitchen in me. I've learned that it was one way that they expressed their love for their family. My 4 year old granddaughter and I cook every night together. She knows more about cooking than some adults. So, I am very grateful that I learned so much from my Italian mother and grandmother and my aunts and uncles who were a constant in my life."
-- Anna O'Dwyer

"One of the things that I value most that I learned from my Italian family is the love of food, specifically fresh home grown food. Growing up my father, born in Sicily, devoted half of our backyard to growing a garden. The fruits of which we enjoyed all summer and fall. He grew Italian string beans, cucumbers, basil, fennel, tomatoes, swiss chard, arugula, and whatever else he could fit. And to top it all off he had a fig tree. My grandfather also had a large garden at his house, which he gave tours of each time we visited. My favorite was always the large cucuzze (baseball bat-sized) squash that he had hanging between the garage and the house. From my grandfather and father, I not only learned to love gardening but I also learned how much better dinner was when it was made with produce grown in the backyard; the vegetables only needed the slightest bit of dressing, or just a touch of olive. Today my husband and I grow a vegetable and herb garden every summer, though we haven't quite gotten it to the calibre of my Dad's garden!"
-- Antoinette Quagliata

"I am so grateful for my 3 Italian daughters Tatiana, Cosima and Maddalena."
-- Suzanne Kim Doud Galli

"I am most thankful for my wonderful husband of 28 years, an Italian born and bred. He’s been in the U.S. longer than he lived in his hometown of Rome, Italy, but you can’t take the Roman out of him. I’m also thankful for his wonderful family who accepted me with open arms."
-- Ginger Croce 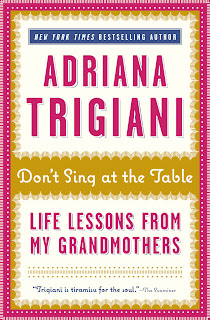 The winners of CiaoDC's Don't Sing at the Table, Life Lessons from My Grandmothers giveawawy are:  Debbie Creel, Anna O'Dwyer, and Antoinette Quagliata.
A special thank you to all that participated in this month's giveaway and for subscribing to CiaoDC.com!
Read CiaoDC's interview with Author Adriana Trigiani Interview here.