Amy Riolo is a self-proclaimed "culinary anthropologist."  According to Chef Jason Roberts, she is "A true guardian of the techniques and inherent goodness of the Mediterranean lifestyle." But what does being a culinary anthropologist actually entail?  Amy, an Italian-American chef, author, and advocate of the Mediterranean diet, teamed up with Culinaria Cooking School's Chefs Stephen Sands and Pete Sniath to lead us on a gastronomical tour of Italy, Greece, and Morocco.  Over the course of eight meals, we learned techniques and terms related to Mediterranean cooking; yet, beyond this surface, Amy took us to the root of the foods, inviting us to appreciate the true culture behind Mediterranean cuisine.

The evening, to which various bloggers and social media mavens were invited, began with an appetizer of sweet grape focaccia paired with an Umbrian brut.  Culinaria's Chef Stephen is currently on his way to achieving his Level 1 Sommelier license and brilliantly paired each of Amy's courses with an Italian vino.  The antipasti featured Abbruzese-style stuffed olives and Roman risotto croquettes (commonly known by their Sicilian counterpart, arancini).  During these courses, we sipped a white wine with notes of citrus and grapefruit, chosen by Stephen for its minerality to cleanse the palate between plates. 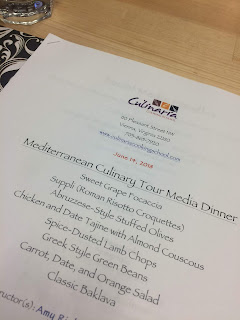 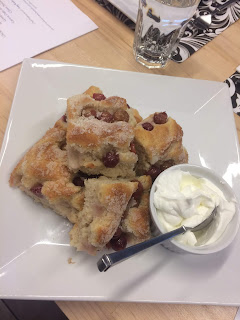 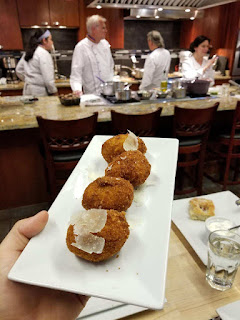 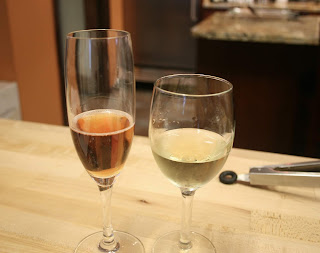 Following the delectable croquettes, the chefs schooled us on traditional Moroccan and Greek cuisine as we dined on chicken with couscous and date tajine.  While indulging in these sweet-and-savory combinations, Amy shared stories of her travels through Morocco and Saudi Arabia, where she learned about the cultural traditions in villages that boast "zero food feet."  The fresh ingredients are a tenet of the Mediterranean diet and are at the heart of culinary traditions from Spain to Israel. 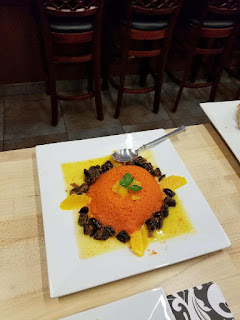 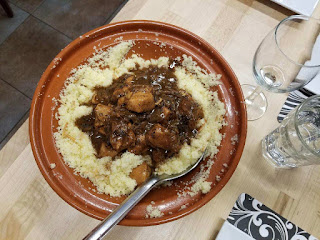 A Tuscan barolo served as the perfect complement to our Greek, Moroccan, and Egyptian dishes, including spice-dusted lamb chops with jalapeño-mint sauce, Greek-style green beans, and carrot, date, and orange salad.  The various courses that Amy curated for us featured a range of flavors, but all clearly shared common roots in their Mediterranean heritage.  Our evening concluded with rich baklava and coffee, and anthropologist Amy taught us the evolution of the dessert that eventually grew into the baklava we enjoy today. 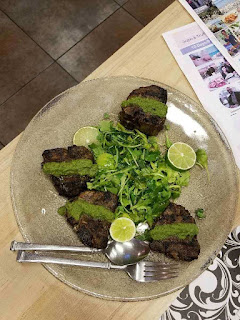 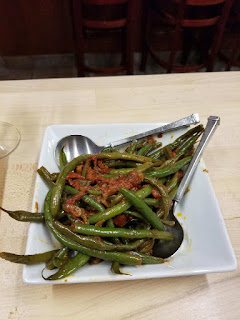 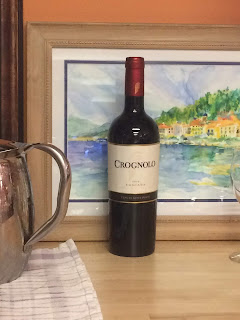 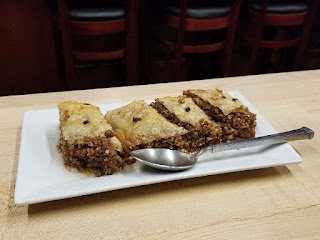 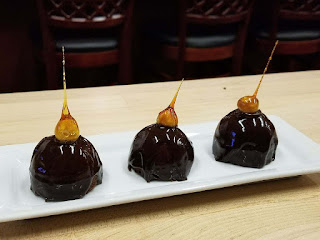 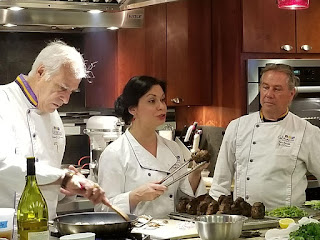 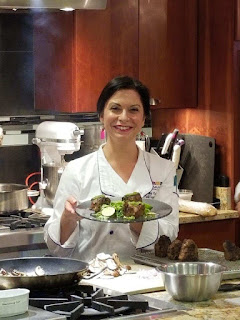 Amy shares her wealth of knowledge in history and gastronomy of the Mediterranean in her many cookbooks and on her youtube channel.  Learn more about her work at amyriolo.com.  To enroll in a class at Culinary Cooking School and learn from Chefs Stephen and Pete, visit culinariacookingschool.com.

"Viewscapes: Home and Abroad" Opens at Via Umbria

CiaoDC visited Georgetown's Via Umbria on Sunday for the opening of Dr. Angela Puglisi's exhibition, "Viewscapes: Home and Abroad."

The exhibition showcases Puglisi's work, which focuses on nature scenes in Washington, D.C., New York, France, and Italy.  An Italian immigrant, Puglisi resides in Vienna, Virginia, but her works seek to share "the poetry of nature" from scenes around the world.  Click this link to hear more about Puglisi's work and Italian heritage from our "CiaoDC Chat" with the artist!

Via Umbria is the perfect home for Puglisi's exhibit.  An Italian gem in the heart of Georgetown, this multifaceted stop boasts Italian goods and groceries, a wine cellar, ceramics, and an intimate restaurant and terrace.  The front window of the shop says it all: "First we eat. Then we do everything else." Via Umbria, from its array of fresh Italian products to its impressive wine collection, celebrates the spirit of Italian culture while comfortably fitting into its setting on Wisconsin Avenue.

Pugilisi's exhibit will be open from June 10th to July 15th.  Fore more information about Via Umbria, visit viaumbria.com. 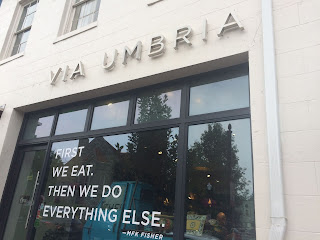 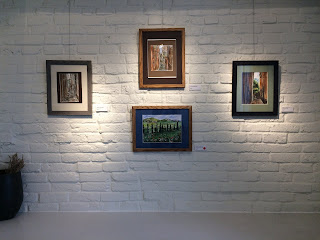 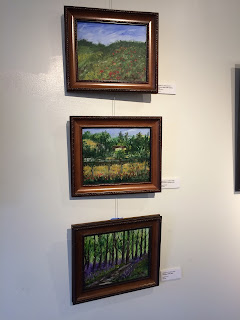 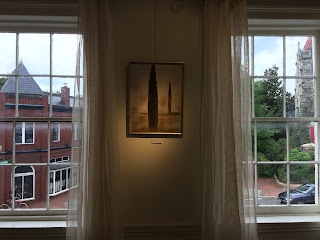 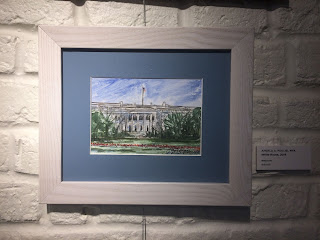 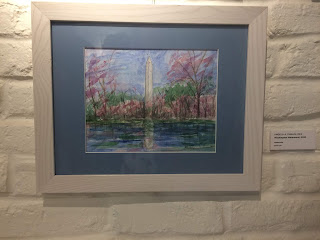 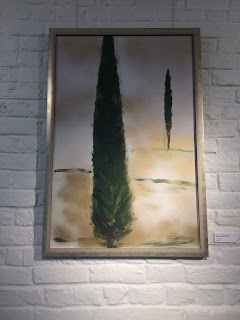 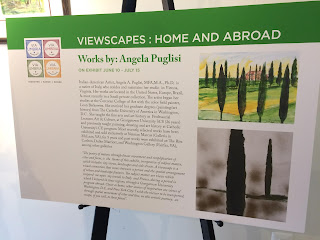 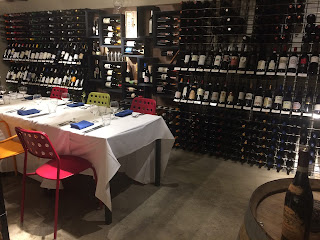 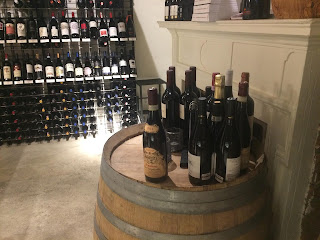 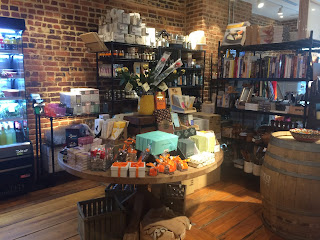 
About the role:
Intern will work with blog contributors to edit and post articles, research relevant news, attend events, and manage social media postings.  Intern should be interested in marketing, social media, and PR and/or writing and editing. Event planning and web design may be involved.

Interns should be available on a part-time, remote basis and located in the DC metro area. Internship is unpaid.  Ideal candidates have an interest in marketing and social media.  Web design experience and Italian speaking is a plus.

Email resume and letter of interest to alyssaciccone@ciaodc.com with subject SUMMER INTERN or call 202-368-7379.

Join Pizza University instructors Giulio Adriani and Glenn Cybulski and special guest Peppe Miele for a fun evening full of good pizza! Students at the Inaugural Dinner will learn how to make authentic neapolitan pizza.
Located in Beltsville, MD, Pizza University offers courses to teach the best pizza-making techniques to up-and-coming "pizzaioli!"  Courses range in topics from "achieving the perfect crust" to sauce secrets and everything in-between.
The event will be held on Monday, June 11th, from 6:30pm - 9:30pm.  To RSVP, click here. 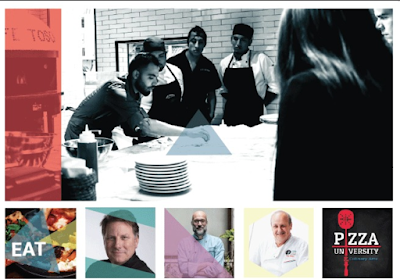 With plans dating back to 1910, Meridian Hill's roots lie in Italian landscaping.  The Interior Department commissioned architects George Burnap and Horace Peaslee to create a park inspired by urban European parks.  Money magazine writes, "The most dramatic feature of the park, which is designed to resemble formal Italian gardens, is a 13-tiered sprawling fountain that spills into a large reflecting pool."  The 12-acre park also boasts several statues, including Dante, a 1921 bronze statue sculpted by Ettore Ximenez in honor of Italian poet Dante Alighieri.

Published by Maria Regina, Contributing Editor
Posted by CiaoDC at 11:52 AM No comments:

"Viewscapes: Home and Abroad" Exhibit at Via Umbria 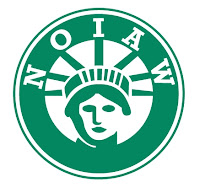 Accomplished artist, Dr. Angela Puglisi chats with CiaoDC on her journey as an Italian immigrant, seasoned artist, and Washingtonian.  Join us for her premiere exhibit of Viewscapes: Home and Abroad at Via Umbria on Sunday, June 10, 4 pm-6 pm in Georgetown.  Highlighting the beauty of Italy, New York, and the place we all call home: Washington, D.C.  Listen to chat here.

Thank you to our weekly chat sponsor, The National Organization of Italian Amerian Women, D.C. Chapter.  For more information on NOIAW and their awesome events, please visit www.noiaw.org.

Posted by CiaoDC at 8:30 AM No comments:

The name of esteemed playwright Anton Chekhov typically assumes an air of seriousness, even despair.  However, Chekhov himself purported that his works were comedies, despite the often grave themes on which he based his plays.  To see The Cherry Orchard, his 1904 play, as a comedy, one must look beyond the historical context of the fall of Russian aristocracy to find humor in the characters’ struggles for love and money.  Classic Italian theatre style commedia dell’arte provides the perfect vehicle for this quest, illuminating the absurd in daily life and creating a farce out of this famed play.

The Cherry Orchard takes us back to Russia at the turn of the century and follows aristocrat Lubov Ranevsky as she returns to her family’s estate after spending five years in Paris.  She arrives at the estate only to learn that the house and its beloved cherry orchard are in a state of decline.  In the midst of the fall of Russian feudal traditions, the estate’s groundskeepers and servants have gained freedom, thus abandoning the orchard and its art of preserving fruit.  It seems that Lubov’s only hope falls on the shoulders of Ermolai Lopakhin, a wealthy businessman whose grandparents worked as serfs on the estate.  Ermolai proposes to Lubov that he turn the estate into lucrative villas and save the Ranevsky family from debt. At first glance, this heavy plot seems difficult to transform into anything but the somber plight of a wealthy aristocrat and her land; yet, Faction of Fools Theatre Company morphs Chekhov’s work into a barrel of laughs in true commedia spirit.

Under the direction of Paul Reisman, Faction of Fools’ entire cast boasts committed, energetic performances. The show opens with the jolly Ermolai (Kathryn Zoerb), who takes the the stage with precisely choreographed physical comedy and a memorable voice.  Over-the-top Ermolai is the perfect complement to dramatic heiress Lubov (Sara Barker) and her daughter Varya (Julia Klavans).  Barker shines in her role with humorous, yet not overly exaggerated, reactions and a hilarious moment of seduction-gone-wrong.  Similarly, Klavans takes on the homely Varya with a relatable persona that helps ground the farce.  Both women elicit empathy from the audience in their awkward misadventures in love and seduction.

Featured actors of the show, several of whom take on multiple characters, create depth and consistency with their skillful choreography, humorous foils, and engaging reactions.  Jack Novak keeps the audience laughing as both Fiers, the hunched-over, elderly former servant, and Yasha, the valet who takes on a lofty sense of self after his sojourn in Paris.  The two men could not be more different, but Novak adeptly executes their physical contrasts. Novak’s Yasha is modern comic relief, guzzling champagne (which the expat quickly criticizes as artificial) to endure the mundane affairs of those he left behind in Russia.  Francesca Chilcote accompanies Yasha in nearly every corner of the house as her character, the servant Dunyasha, desperately throws herself at him throughout the show.  Chilcote consistently delivers a true commedia performance by delivering her dialogue with absurd physical comedy.

The technical team of Faction of Fools mirrors the actors by painting 20th century Russia with colors of farce and historical realism.  Ethan Sinnott’s set adapts for levels and uses various doors and windows to enable physical comedy.  Painted trees in the background remind the audience of the estate’s famous cherry orchard.

Costumes are essential to the translation of this work from tragic to comedic.  Kitt Crescenzo pays tribute to commedia dell’arte with the incorporation of masks and makeup to enhance the characters personas.  Elegant gowns and frayed shawls thoughtfully reflect the period of socioeconomic change by illuminating the class divisions amongst characters.


For a company to take on Chekhov with anything short of utmost solemnity seems unorthodox, but Faction of Fools’ interpretation implores viewers to question if The Cherry Orchard was intended for comedy or tragedy in the first place.  By incorporating themes and elements of traditional commedia dell’arte, the show pays tribute to a form of theatre that begs audiences to find humor in everything.  With energetic actors and detailed direction, Faction of Fools’ The Cherry Orchard breathes new life into classic art.

Posted by CiaoDC at 3:12 PM No comments: