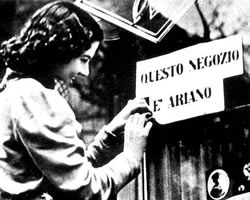 was one of the first European countries to establish “Remembrance Day,” an international memorial day held around the world each year on January 27. In this context, the Italian Embassy and Consulates, and the Italian Cultural Institutes in the  offer a wide range of cultural events to maintain the memory of the Holocaust in younger generations and to continue honoring the victims of the Holocaust. This year's commemorative events are also part of “2013 - Year of Italian Culture in the .”

“The Italian diplomatic network in the  - stated Claudio Bisogniero, Ambassador of Italy in  - is making a special effort to stress the meaning of this day, a plea to never forget the horrors of the Holocaust and to guard against all forms of anti-Semitism in the future.”

The Embassy in  is hosting two events. The first will begin today at 7:00 p.m. with the presentation of the play “1938 - The Invention of the Enemy.” January 24 Event Information here. 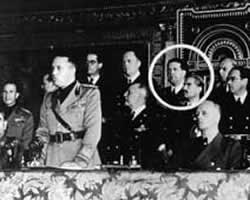 The second event will take place at the Embassy on Monday, January 28: a screening of the film “The Righteous Enemy,” directed in 1987 by Joseph Rochlitz. January 28 Event Information here.

Over the course of these next few days, numerous events will be held at the Consulates and the Italian Cultural Institutes in major  cities. From  to , from  to , from  to , from to , ample space will be devoted to commemorations, presentations, conferences, and film screenings on the Holocaust and its remembrance.
Posted by CiaoDC at 3:00 PM No comments:

An intimate affair and grand networking opportunity, NOIAW's Epiphany Celebration was initiated by it's national headquarter's in New York 28 years ago.  Recently launched four years ago in Washington, DC by the Greater Washington, DC Region of NOIAW, the honored 'Three Wise Women' are traditionally introduced by Master of Ceremonies Congresswomen Rosa L. DeLauro who will be presented by Ambassador Constance Morella this year.  Other distinguished guests include dignitaries of the Italian Embassy; representatives of national Italian organizations among other luminaries and Washington movers and shakers.

Also featured this year will be a stellar silent auction to include a coveted sculpture from the Torpedo Factory crafted and donated by honoree Mirella Monti Belshe; and other gifts of art, Italian cuisine, fashion and more!  Tickets are $115 and include a dinner buffet and bar.  For more information click here.  To hear highlights of the event and an exclusive CiaoDC.com interview with Diana Femia, President of Greater Washington, DC Region NOIAW listen here (mp3).

Washington, DC—This morning at the National Gallery of Art, Italian Minister of Foreign Affairs Giulio Terzi di Sant'Agata opens 2013—The Year of Italian Culture by unveiling Michelangelo's David-Apollo, which will be on view in the West Building's Italian galleries from December 13, 2012, through March 3, 2013.
2013—The Year of Italian Culture is a project launched by Giulio Terzi di Sant'Agata under the auspices of the President of the Italian Republic, Giorgio Napolitano. This program will showcase the best of Italian arts and culture in some 70 U.S. cultural institutions across America in more than 40 major cities, including Boston, Chicago, Detroit, Houston, Los Angeles, Miami, New York, Philadelphia, San Francisco, and Washington. The initiative will highlight research, discovery, and innovation in Italian culture and identity, focusing on art, music, theater, cinema, literature, science, design, fashion, and cuisine.

"My country's cultural heritage is a unique 'natural resource,'" said Giulio Terzi di Sant'Agata. "Culture is what immediately comes to mind when you think about Italy. It is indeed a fundamental pillar of our foreign policy. In this spirit we launch the year of Italian culture in the United States in 2013, which will include an impressive program of events in the arts, science, and technology. This initiative will enhance the friendship between Italy and the United States and forge a new legacy for future generations."
Exhibition Organization and Support
Under the auspices of the President of the Italian Republic, the presentation ofMichelangelo's David-Apollo inaugurates 2013—The Year of Italian Culture, organized by The Italian Ministry of Foreign Affairs and the Embassy of Italy in Washington, in collaboration with the Ministero per i Beni e le Attività Culturali and with the support of the Corporate Ambassadors Intesa Sanpaolo and Eni.
The presentation has been organized by the National Gallery of Art, Washington, The Italian Ministry of Foreign Affairs, the Embassy of Italy in Washington, the Soprintendenza Speciale per il Patrimonio Storico, Artistico ed Etnoantropologico e per il Polo Museale della città di Firenze, and the Museo Nazionale del Bargello, Florence.
Michelangelo's David-Apollo
The ideal of the multitalented Renaissance man came to life in Michelangelo Buonarroti (1475–1564), whose achievements in sculpture, painting, architecture, and poetry are legendary. The subject of this statue, like its form, is unresolved. In 1550 Michelangelo's biographer Giorgio Vasari described the figure as "an Apollo who draws an arrow from his quiver," referring to the classical god of music and enlightenment, whose arrows could assail both terrible monsters and disrespectful mortals. A 1553 inventory of the collection of Duke Cosimo I de' Medici, however, calls the work "an incomplete David by Buonarroti." By then it had entered the Palazzo Vecchio (the seat of government in Florence), joining several earlier sculptures of the biblical giant-killer David, a favorite Florentine symbol of resistance to tyranny.
Related Programs and Offerings
An illustrated brochure written by Alison Luchs, curator of early European sculpture, will accompany the exhibition. Luchs will also present a public lecture entitled "Michelangelo's David-Apollo: An Offer He Couldn't Refuse," on January 27 at 2:00 p.m. in the East Building Auditorium. Eric Denker, senior lecturer, will lead Gallery Talks about the sculpture at noon on January 3, 5, 7, and 9 in the West Building.
Pina Ragionieri, director of Casa Buonarroti, will give an overview of the Florentine museum's remarkable collection of Michelangelo's work. The lecture will take place at the Embassy of Italy in Washington on February 11 at 3:00 p.m.
2013—The Year of Italian Culture in the United States
Research, discovery, and innovation will be highlighted through Italian art, music, theater, cinema, literature, science, design, fashion, and cuisine. Nicola Piovani, winner of the 1998 Oscar for Best Original Dramatic Score of the Roberto Benigni film La vita è bella (Life is Beautiful), has composed a musical score dedicated to this yearlong event. The celebration also coincides with the 200th anniversary of Giuseppe Verdi's birth, which will be honored with performances featuring Riccardo Muti, conductor and musical director of the Chicago Symphony Orchestra, and classical pianist Maurizio Pollini. Visitors to American museums and cultural venues will be able to view great masterpieces by Michelangelo, Caravaggio, Morandi, Chia, and De Chirico, among others
Posted by CiaoDC at 10:22 AM No comments: