Last week, I ventured into Bibiana Osteria Enoteca for a post theater libation, eager to try some of their homemade liquors. I had the Bibiana, a luscious blend of prosecco and fresh peach purée, while my company sipped on the Amalfitano - homemade limoncello with Italian lemon soda. Both were tasty, but the Amalfitano would likely be better as summer drink, than on a frosty winter night. With the wide selection of specialty cocktails, it is likely you will a few drinks that suit your taste buds.

My guest and I marveled at the inside decor, that is both upscale and relaxed at the same time. The partially open kitchen allows curious diners to catch a glimpse of the kitchen staff, under the direction of Chef Stefinelli, at work.

And work they did. In addition to preparing dinner for those in the dining room, the kitchen kindly sent out a nicely plated Baccala'. It sat atop a base of crushed potatoes and mushroom compote. The array of textures complemented one another well. Had I actually been hungry, I would have liked to try the Scarola or Uovo.

Whether your looking for authentic Italian liqueurs, a pre-theater dinner, or their 'Velocissimo' business lunch, you'll want to visit Bibiania yourself and see all this vibrant osteria e enoteca has to offer. 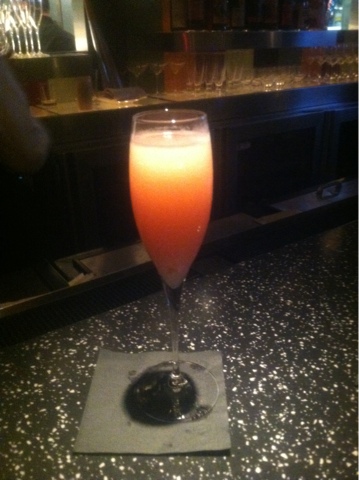 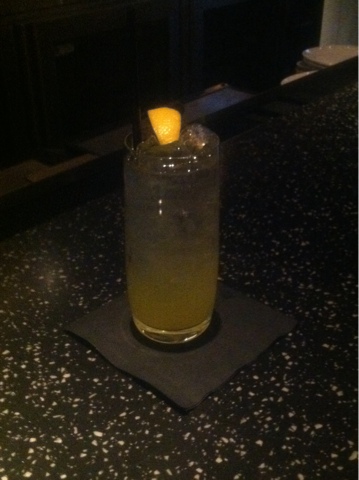 Bibiana is located at New York Ave, NW. They are open for lunch and dinner during the week, and dinner on Saturdays and Sundays.
Posted by Italiana82 at 7:57 PM No comments:

CiaoDC recently had the privilege of dining at Enzo Fargione's Elisir.  It is quite possibly this author's new favorite in the DC region and this review will attempt to explain why.


Cocktails and Fun Starters
Cocktails:  We started out with the Tentare Feito (which the menu describes as Bourbon, Orange, Lemon, Basil, Campari Marshmellow), along with a specialty cocktail for the evening that the waiter talked me into.  Mixologist Steve Oshana named it the "Funky Cold Medina," after the Tone Loc hit.  It involved Plymouth Gin, Poma, Prosecco and lemon juice.  It was delicious, and I'm not usually a fan of gin.  The drinks only got better from there as Elisir's Sommelier Justin Kraemer's selections for each course put our meal over the top.


Fun Starters:  we got a few little treats that were so unexpected I forgot to take pictures!  The first was a Squash Soup that had an amaretti cookie in it and a foamed finish.  It was multi-faceted and delicious.  I wish I had written down the description!  We also had an olive paste filled Chocolate Lollipop dipped in salt and gold flakes.


At our waiter's suggestion, we also ordered the Olive Oil and Infused Sea Salt Tasting which involved specialty olive oils from Liguria, Tuscany and Sicily paired with house infused black olive, chianti and basil infused sea salts (respectively).  A great twist on the traditional olive oil and bread that we're all used to at Italian restaurants. 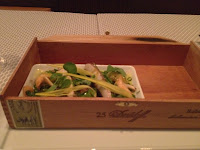 Antipasto: Carpaccio di Branzino Affumicato nella Scatola del Sigaro al Tavolo  Four minute apple wood smoked branzino carpaccio served in a cigar box with citrus dressing, scallions, shaved mushrooms, pea tendrils, roasted garlic chips and blood oranges.
Wine pairing: Graham Beck Brut Rose' South Africa
This dish not only had a great presentation, but the flavors were incredible.  The saltiness of the branzino and garlic chips was balanced perfectly by the sweetness of the blood oranges and citrus dressing.  We couldn't have asked for a better wine pairing, and this comes from someone who doesn't usually drink Rose' or much of anything sparkling! 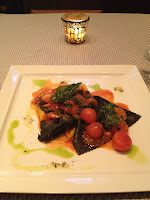 Wine Pairing:
Valpolicella Bussola Classico Superiore 2007
What a masterpiece, or capolavoro, I should say!  Two of my favorite foods together - lobster and pasta, I have been disappointed too many times with what I've always thought couldn't be wrong together.  This dish was just the opposite.  Again, a great wine choice - I hate to break it to all you I-have-to-drink-white-with-fish/seafood.  That simply is not the case, and you're missing out if you continue to follow such a silly rule. 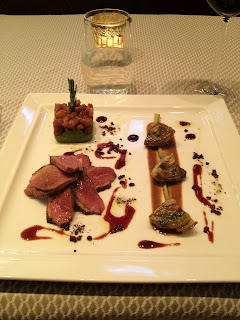 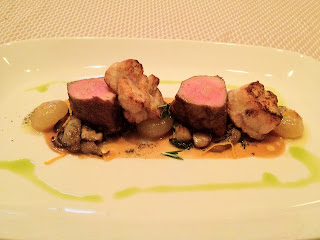 Filetto di Vitello e Animelle Arrosto - Roasted veal filet and pan seared veal sweetbreads in a creamy orange/mascarpone cheese sauce with cipollini onions and sautéed mushrooms.
Wine Pairing: Barolo - Damilano Lecinquevigne Piedmont 2005
CiaoDC's dining partner ordered this combination of veal and Barolo and could not have been more pleased.  Veal is one of his favorites, and he hasn't really stopped talking about the Barolo since.


Dolci
Although we couldn't find room for dolci, Chef Enzo treated us to a few little chocolates and even came out to greet us at the end of the meal!  It was a gran piacere to meet him, especially because he was as gracious as he is talented.
CiaoDC strongly recommends that you dine at Elisir soon!
Posted by Ciao DC at 6:01 PM 6 comments:


Almost every high-school student reading Romeo and Juliet for the first time understands the tragedy of the ill-fated lovers, but Shakespeare's humor can be lost in translation.  Enter Faction of Fools' version, "A Commedia ROMEO AND JULIET," where the physical spectacle serves the interpretation well.  Faction of Fools is a D.C. theater company celebrating Commedia dell'Arte, a theater style that grew out of 16th century Italy.
While the original tragedy of the text is not ignored, under the artistic direction of Matthew R. Wilson, "A Commedia" excels in bringing the original humor of the text into focus.  The five-character ensemble executes one cleverly choreographed scene after another in an 80-minute, high-octane version of Shakespeare' Romeo and Juliet.

From the exaggerated slow-motion sword fight between servants of the quarreling houses, to Juliet's dance of avoidance with Paris, the arrogant and effeminate dandy to whom she is betrothed; and Juliet's eyes darting back and forth as she impatiently awaits the effects of a sleeping potion, the physical spectacularity juxtaposed against the familiar scenes of tragedy, allow both extremes to be more appreciated.

Although both the play and the Commedia dell'Arte style are from the times of the Renaissance, it is clear from the infusion of 21st-century humor that "Faction of Fools" has not forgotten about the audience.

For example, after giving Romeo a kiss good night and agreeing that they would meet the next day, Romeo's asks Juliet, "O wilt thou leave me so unsatisfied?"  She suspiciously retorts, "What satisfaction canst thou have tonight?" with the attitude of a modern women.

In following the conventions of Commedia dell'Arte, each of the cast members play several different  characters.  Switching roles is as easy as changing a mask, flipping a double-sided costume, or changing the inflection in one's voice.  Often, the haste with which characters change adds to the hilarity, as in the case of Mercutio morphing into Lord Capulet, or Romeo into his dad, Lord Montague, in quick succession.

All of this livens a stage that, without the actors, is set with just two back drops of black fabric.  The only props used are a few stackable wooden boxes that are transformed through every scene, versatile enough to represent columns in the Lord Capulet's house, a cross and a confessional at the monastery.

Still, the lack of props also brings opportunity for more entertainment, from which Faction of Fools does not shy away.  The momentary breaks in the play where cast members integrate their own comedy of errors, don't get in the way, but rather add to the spectacle.  When "Mercutio" takes longer than necessary to arrange the wooden crates for the next scene, he notes that he would kill Rubik, if given the chance.

When the young lovers meet alone for the first time outside of Juliet's balcony, she leans towards Romeo who is perched upon a wall, and cast members push the two close - very close - together, after the movement upon their wooden boxes has caused the castor wheels to create distance.

And after Romeo, Juliet, and Paris are all found to *actually* be dead in the tomb, Friar Lawrence is briefly implicated, having been found bumbling around outside the tomb.   The friar recounts the story of the star-crossed lovers in a Clue-esque fashion; wherein the dead Juliet, and substitute dummies of Romeo and Paris, are tossed like rag dolls from one character to another.

"A Commedia" is not all jokes, we do feel the anguish brought about by the death of Tybalt and Mercutio, as well as Lord Capulet's tirade toward Juliet when she rejects her father's wishes to marry Paris.

Still, in the traditional version of Romeo and Juliet we are left with a bittersweet feeling, but to the audience's pleasure "A Commedia" squeezes every last drop out of this farce.  After reciting the  famous closing lines, "There never was a story of more woe, than this of Juliet and her Romeo," the page turns back to the audience melodramtically with a sad face that emulates an emoticon.  Indeed, even the curtains are closed with a giggle.

Editor's Note: "A Commedia Romeo and Juliet" is on stage at the Mead Theatre Lab at Flashpoint, located at 916 G Street, through February 4th. Faction of Fools' next production of the 2011 - 2012 season will be "Hamlecchino: Clown Prince of Denmark," playing April 26-May 19th at the Galludet University's Elstad Auditorium.
Posted by Italiana82 at 11:13 PM No comments: 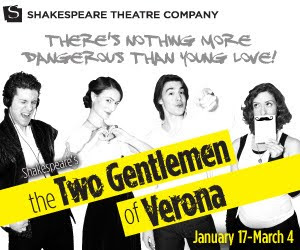 WIN TICKETS HERE - share you favorite quote from shakespeare with ciaodc.com and be entered to win tickets to Shakespeare Theatre Company's production of Two Gentleman of Verona - giveaway will continue through February 15th.

Congratulations to Marylou Bono of Gaithersburg, MD - she is the winner of CiaoDC's Holiday Giveaway of four (4) tickets to Two Gentleman of Verona.
Two Gentleman of Verona playing January 17th - March 4. Possibly Shakespeare’s earliest romantic comedy, The Two Gentlemen of Verona centers on Valentine and Proteus, loyal friends who are transformed into enemies thanks to their fickle hearts. After traveling to Milan, Valentine falls in love with the Duke’s daughter, Silvia. By chance or fate, Proteus also falls in love with her, forsaking the woman he left behind in Verona. A jealous Proteus betrays his friend’s plan to elope with Silvia, and the Duke banishes Valentine. Should Valentine and Proteus sacrifice their friendship for desire, or can they somehow find a compromise? This adventurous, romantic story has it all—hidden identities, comedy, a gang of gentlemen outlaws—even a double wedding. Former STC Associate Director PJ Paparelli returns to direct this early Shakespeare classic.
Posted by CiaoDC at 3:46 PM No comments: