Italy4Kids - by the embassy of Italy

It's never to soon to start learning, that's why the embassy of Italy created the Italy4Kids website! The front page of the site is a map marked with places of interest in D.C. that have notable Italian influence. For instance, the National Archives, home of the U.S. Declaration of Independence, was written by Thomas Jefferson. Jefferson was influenced by many of the ideas of Phillip Mazzei, an Italian-born patriot and friend to Jefferson. One of the most famous lines of the Declaration is said to be a paraphrased from Mazzei's work. Which line is it you ask? Find out here.

There are also three different portals to Italy, each with age-appropriate content related to Italian language, history, and more. The adults just might learn something too. So what are you waiting for, get started now!
Posted by Italiana82 at 11:37 PM No comments:

Some of you may already be familiar with the Calandra Italian American Institute at Queens College in New York City. For those of you who are not, it offers a variety of conferences and on-air programming aimed at exploring subjects of interest to the Italian American community and beyond. Calandra Institute's programs, such as Italics have traditionally aired on CUNY TV, available only in New York. However, they now have a youtube channel where you view past programming, including interviews, discussions, book presentations, and the like, at your leisure.

Through Dec 31: Italian Renaissance Art Tour at the National Gallery of Art

What better way to end the holiday weekend than a grand tour of Italian Renaissance paintings.  View works from masters of the early-13th to the late-16th century, such as Duccio, Leonardo, Verrocchio, Botticelli, Giorgione, Bellini, Raphael, and Titian.  Their works trace the rise of culture and ideals that manifested themselves in the revival of classical humanism.


Also, tomorrow is the last day for another Italian exhibit, "Italian Master Drawings from the Wolfgang Ratjen Collection: 1525–1835," also in the West Building on the ground floor.


Have you visited either of these exhibits? Let us know what you learned, what you liked best, or even the preferred times to visit!
Posted by Italiana82 at 11:30 AM No comments:

Giulio Terzi Sant'Agata, Italy's ambassador to Washington from 2009 - 2011, has recently been appointed as the Minister of Foreign Affairs under Mario Monti's new Italian government.  Under his leadership, the Italian AP exam was re-instituted, and all around the country, Americans and Italians spent this year commemorating the 150th anniversary of the unification of Italy.  Watch this short highlight video by i-italy saluting the ambassador's work in the U.S, and read the ambassador's goodbye letter to Italian American community below:

Fellow Italians
I bid you and the United States farewell as I continue, as Minister of Foreign Affairs, my service for the Government and go represent my country with the pride I have often seen in the facial expressions and I have often heard in the words of all the Italians in America.
At this time I warmly salute you all: the Italian-American community, the elected representatives in the United States, the associations that have sustained the activities of the Embassy in Washington and its consular net with great diligence, and all the friends of Italy.
I tackle this new appointment with gratitude for the trust the President of Italy and the Prime Minister have in me, knowing that, by acting as a Minister of the Republic, I will always be able to count on the extraordinary heritage of friendship, historical, cultural, economic and human ties between Italy and the United States. Those ties that the Italian-American community represents at its best.
We have accomplished a lot together. I cherish two specific memories: the celebrations held in the past months for the 150th anniversary of the Unification of Italy, sealed by President's Obama proclamation on March 17th, and most of all by President Napolitano's visit to celebrate with you "Italy's birthday"; and the return of the Advanced Placement program and of courses of Italian in American classes. A heritage, I am certain, the Italian-American community will continue to help grow, supporting, as always, all the activities started in the last months. Goodbye.
Posted by Italiana82 at 7:30 PM No comments:

The last weekend of October was a busy one here in Washington, especially with the annual NIAF Gala, a weekend packed full of events at the Washington Hilton Hotel.  Ciao DC was at  Expo Italia, a gateway to the best that Italians and Italian Americans businesses have to offer.

Friday night's Salute to the Martini offered a delicious pasta bar courtesy of Del Grosso Foods.  Glacier Vodka, an American company, provided open bar as the evenings sponsor.  Music from both the renowned Radio King Orchestra and international recording artist Cristina Fontanelli provided the right kind of ambiance to get couples dancing.
On Saturday evening, more than 2,000 guests were in attendance to honor the many great accomplishments of Italian Americans.  For an extra special treat, President Obama joined the gala, to offer some humor and provide accolades to Pelosi and Napolitano, two of the top Italian Americans in our government.
Weren't able to attend this year?  Read the complete review at the NIAF website. Check out this highlight video of the gala dinner from the Italian Embassy!
Don't want to miss out next year?  Start planning now!
What was your favorite part of NIAF's 36th Anniversary Gala?  Let us know in the comment section below!
Posted by Italiana82 at 12:41 AM No comments: 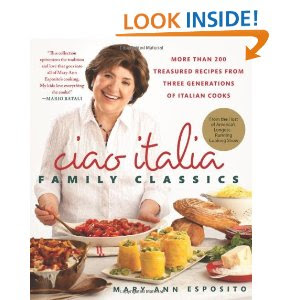 Congratulations to Dino Caterini of Bethesda, MD and Sarah LoFaso. They are the winners of Ciao Italia Family Classics by Mary Ann Esposito. Thank you for subscribing to CiaoDC.com at NIAF's Expo Italia. Enjoy a taste of your prize below and welcome to CiaoDC.com!
Potato, Zucchini and Parmigiano Reggiano Cheese Tart
Tortino di Patate, Zucchine e Parmigiano-Reggiano
When I was growing up I could count on the same lunch every Saturday: chicken livers with onions and fried potatoes and zucchini. That memory of Saturday's main fare has always stayed with me. I have since given up eating chicken livers and have given potatoes and zucchini a new lease on taste in this easy to make layered tart, no pastry involved. Just an elegant presentation of simple fare.

Instructions:
Coat a 9 x 3 inch spring form pan with 1 tablespoon of the butter and set aside.Preheat the oven to 375F.Place the potato slices in a bowl and toss them gently with the thyme, salt and pepper. Set side.Cut four zucchini into 1/4-inch thick slices and sauté' in 3 tablespoons of olive oil until lightly browned. Transfer the zucchini to a bowl and stir in the mint leaves. Season with salt and pepper and set aside.Make 4 alternating layers of potatoes, zucchini and cheese, dotting each layer with bits of the remaining butter. Bake for 20 to 25 minutes or until nicely browned on top.Transfer the pan to a cooling rack. Remove the sides of the spring form pan. Place a sprig of mint on the tart. Cut into wedges to serve.

Tip: Potatoes should be kept in brown paper bags in a cool, not cold dark place.